This recipe is for the slow cooker, but you could probably make this in a wok on the hob if you only have an hour for cooking. Also my slow cooker has a ‘sauté’ setting, which is great for the first part of this recipe but if yours doesn’t, then start off in a wok and move it to the slow cooker when it’s time to put it on slow.

Heat the oil and add the chicken. Fry until the chicken is browning. Mix in the spring onions, carrots and ginger. Whilst that is going on, mix up your sauce. First measure the sugar, then cornflour into a bowl.  Follow with the tomato puree, vinegar and soy sauce. Mix it together until it makes a runny paste.

TIP: If you start with the dry ingredients and then the wet, you don’t have to wash the spoon – easy.

Go back to the frying chicken and vegetables, add in the pineapples (with juice) and the chicken stock. Stir and then pour in the mixed up sauce. Give it a good stir and bring to the boil.

Now is the time to either transfer to a warmed up slow cooker or to switch to ‘slow cooker’ mode. Put it on for as long as you need it to be on. I was going to be out for 12 hours today, so I put it on for the maximum, which is eight hours.

Five minutes before you are ready to serve, add in the bamboo shoots and mange tout. Serve with rice or noodles.

On Tuesdays, the children have swimming after school.  We get in after 6pm, cold and hungry. This is slow cooker day. If I had been at home today I would have put this on late morning. However, I had put my hand up for helping on a school trip so I was out with them at 8am. And when I had a job out of the house, I used to get meals into the slow cooker before we left the house for school drop off.

It can be so hard to add this into getting everyone ready, making packed lunches and all that jazz you have to deal with on a weekday morning. However, there is nothing so good as the calm assurance that whilst you are going about your business, a tasty, healthy meal is cooking away at home and will be there to greet you when you get back in. It’s like having a house keeper. If you forget the fact that it was you that put it together at 7am!

I was out for 10 hours today, so by the time we got in, the slow cooker had stopped cooking and was just keeping it warm.  You can either switch the slow cooker back on to get it back to hot or pour it into a large pan on the hob and warm it up that way.  I did the latter today as heating it up on the hob can reduce the liquid that you get more of when you cook in a slow cooker. I added the mange tout and bamboo shoots about five minutes before I was ready to serve. At the same time, I boiled up some rice, got the swim kits in the washing machine, washed up the packed lunch boxes, set the table and had my first drink of water of the day! Ooops.

This is such a yummy meal, taken from The Complete Slow Cooker by Sara Lewis. A book given to me by an Australian friend when she was clearing out her kitchen to move to Thailand. Such a blessing (the book and the friend). I have so many more awesome meals to share with you from this one. Like Friday night curries – so good. 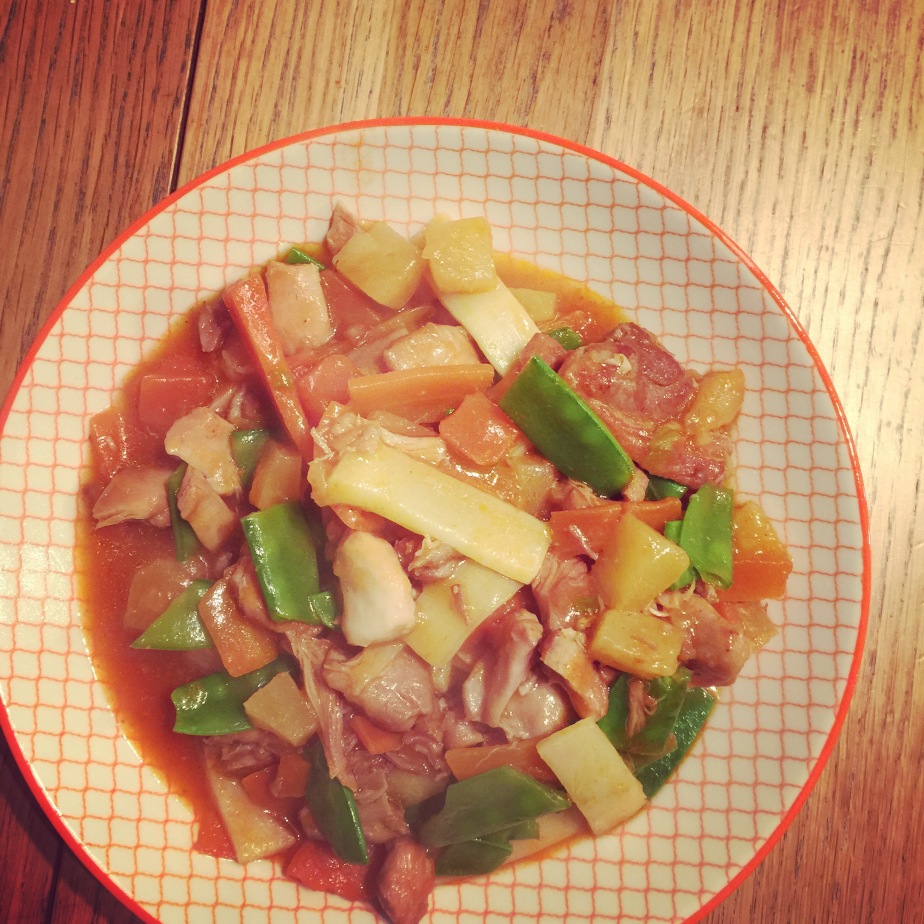