I followed the recipe from James Morton’s ‘Brilliant Bread’ book. I’m going to be working my way through this book to extend my bread repertoire.

Add the water and swirl around with our hand until you can form a sticky and yet coherent dough. Cover the bowl with a damp tea towel and put it in a warm place. I sat mine next to the radiator, because in the winter that’s the only place that is warm! Leave for 40 minutes or until noticeably increased in size.

Oil your hand and then scoop up one side of the dough and push it into the middle. Turn the bowl round a quarter and do the same time. Repeat until it’s a tidy dough ball. Cover again and return to a warm place. Give it at least another 40 minutes of rising time. I gave mine longer, until it looked like it had doubled in size. Turn your oven onto really hot (240°C/gas 9).

When your dough has risen again, put it on a lightly greased surface and roll it into a long sausage. Cut out eight equal piece. Flatten these so they are about half a centimetre deep. James said to use a rolling pin, which I did but then I kind of flattened them in my hand. They are not going to be perfect oval shapes but I think that’s fine. Rustic is good for homemade pitas. Put them on two baking trays, four on each. James said there was no need to line them, but I did. Don’t trust my pans and it’s easier for washing up.

Turn the oven down to 220°C/gas 7 and bake them until they are puffed up and a golden colour. Mine took longer than the suggested 10 minute, more like 20 minutes. As the sizes were a little irregular, some were ready before others so I just moved them around and took out when ready.

When they had been on a cooling rack for five minutes I could wait no longer and had one, just plain and warm. So good! I wrapped them up and kept them warm for the children to have when they came in from school. We sliced them in half and spread olive oil spread on them. A very successful after-school snack!

All eight pitas were gone by breakfast the next day. 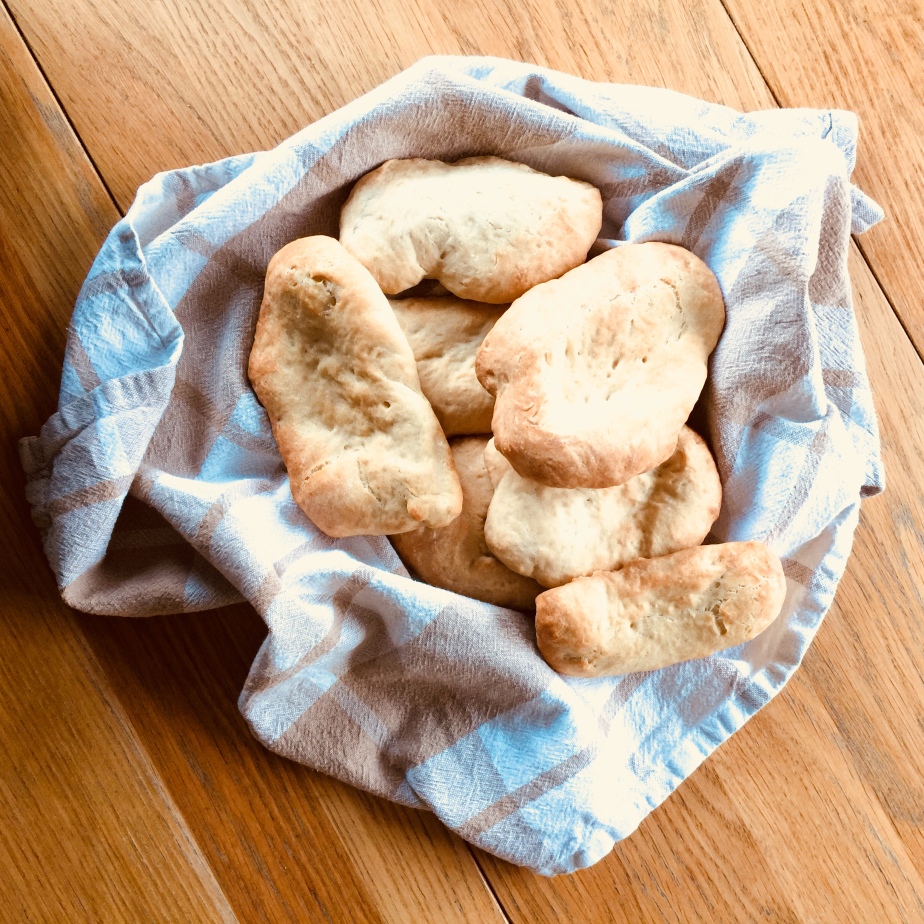